The idea from this H2K project came from discussions between Philippe Leuwers, CEO of TEXYS Group, and Michel Augizeau, Founder and General Manager of TECMAS, an internationally reknown bike racing team. They both have the will to transform their passion for racing motorbikes into progress. Their inspiration will bring innovation to light mobility.

This project has been named H2K, for H2 Kompact, illustrating the key objectives of this concept: the development of a highly compact fuel cell hydrogen powertrain, with the best possible efficiency.

H2 MOTRONICS expresses the will to demonstrate its capacity in technical and innovative project management, in developing H2K, a proof of concept with a modern powertrain. The extreme constraints of a racing motorcycle will showcase both compacity and performance requirements. 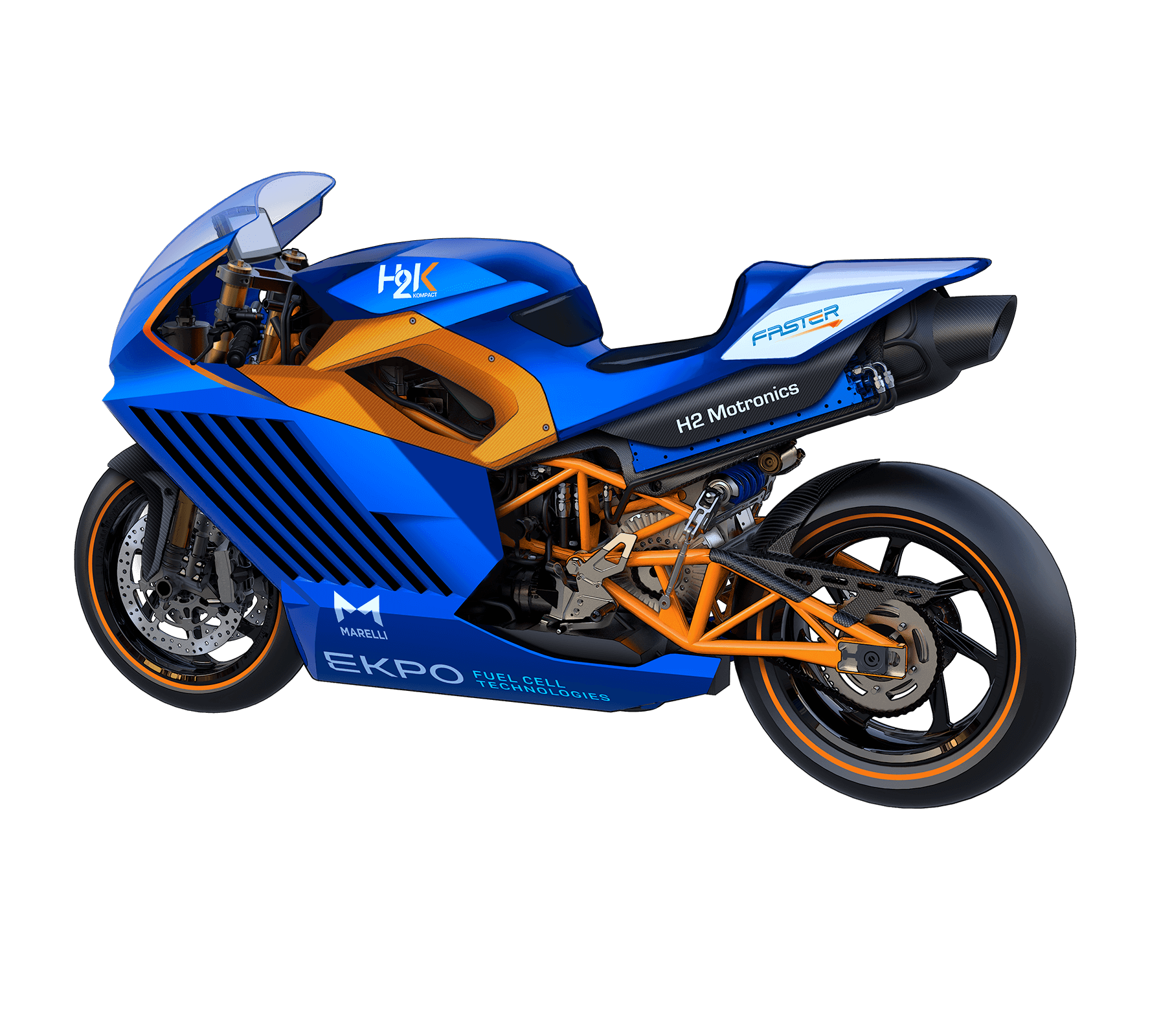 TEXYS Group’s DNA is rooted in Motorsport. The demanding expectations of such an environment has guided us to set natural objectives: to manufacture products at the highest level of quality, to offer exceptional responsiveness and flexibility.

Within the meticulous and complex world of embedded electronics, our enthusiasm to take on new challenges drives us to offer creative, enhanced, and bespoke technological solutions. 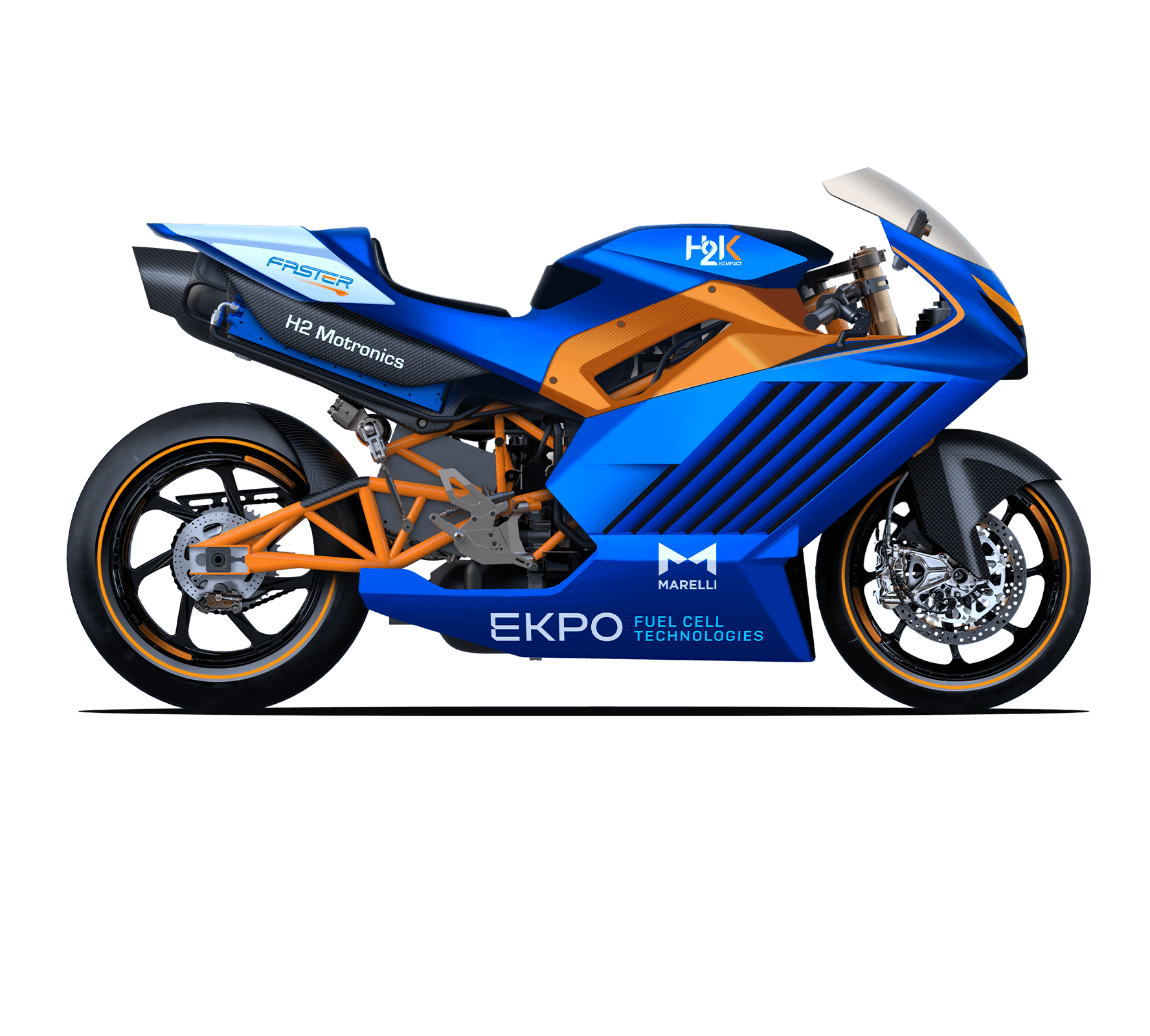 The main purpose of H2K is to showcase lightweight mobility powered by fuel cell hydrogen technology.

The H2K concept is the perfect combination of a light modern powered vehicle offering travel flexibility thanks to a compact powertrain, with zero-tailpipe emission.
The evolution of embedded measurement has been being driven over the years by compacity requirements for lighter components with increased performances.
This path has been successfully explored by TEXYS Group over the past 20 years of its expertise and developments.

The potential applications of H2K powertrain are various types of mobility facing the same lightweight and compacity requirements, with an environmental responsibility in mind. The H2K powertrain concept is transferable to 2 & 4-wheeler urban vehicles, light marine applications, light recreational vehicles (off-road buggies, snowmobiles) and boat tenders. The platform of a high-performance motorbikes powered by hydrogen fuel cell will encompass all requirements for an efficient mobility: compact, lightweight, efficient and environmentally friendly. 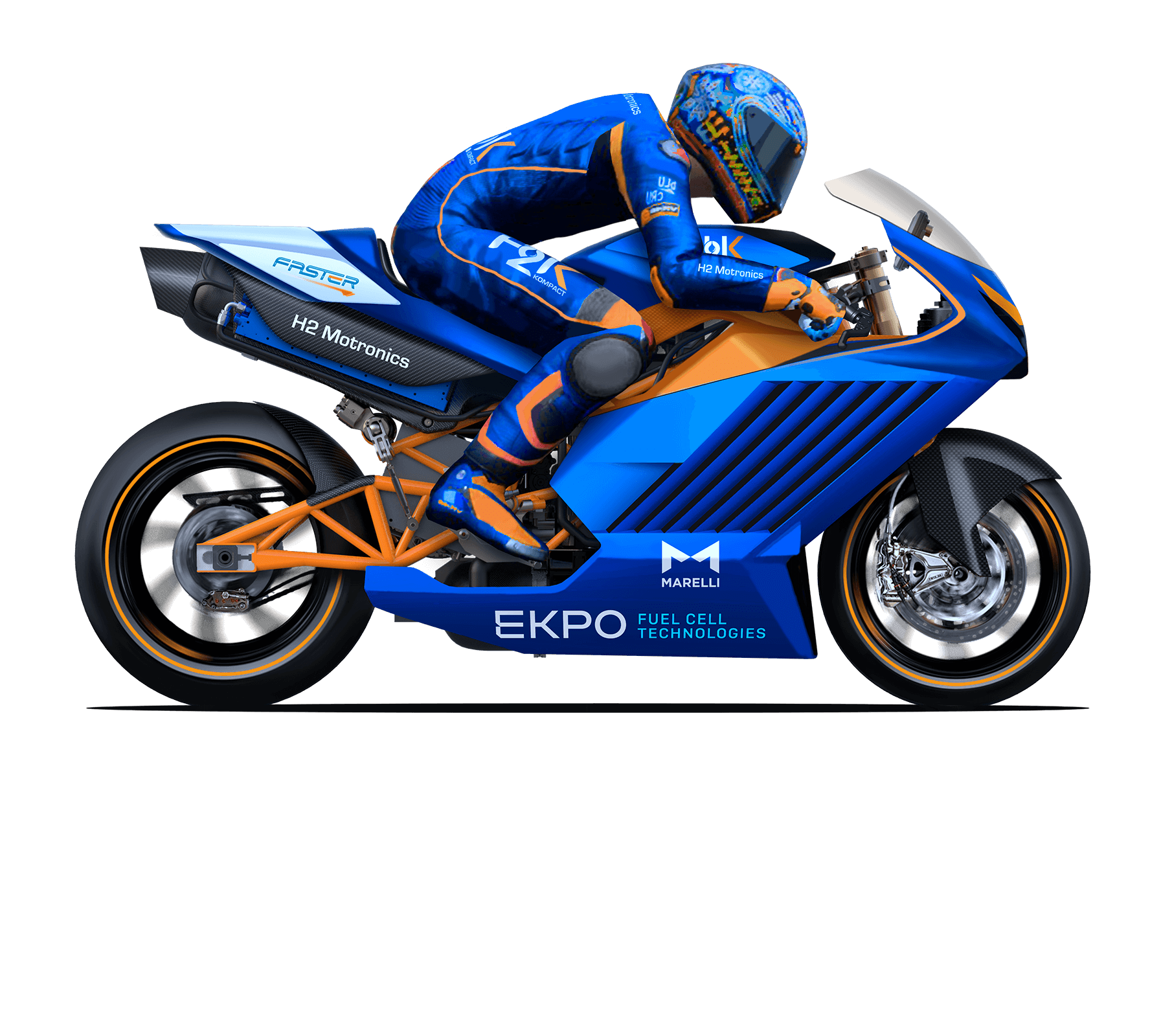 The final objective of this project is to demonstrate the performances and efficiency of the fuel cell hydrogen technology. A racing bike is the most constraining environment, with compacity and performances requirements.
This compact developed solution will be a starting point solution for light mobility whether on ground (2 or 4 wheels’ urban vehicles), in the air (light aircrafts) or on sea (light boats or tenders) through:

Mass and power have a huge effect on performance as we can observe in the existing motorbike racing series. Based on an extensive work started in October 2019, our simulations and engineering study can state the following :

* Simulations and calculations based on a typical circuit layout such as Valencia, Circuit Ricardo Tormo.

H2K is a project labelled by Pôle Véhicule du Futur, one of the leading automotive clusters in Europe, federating industrials and research units in the field of future vehicles and mobility. 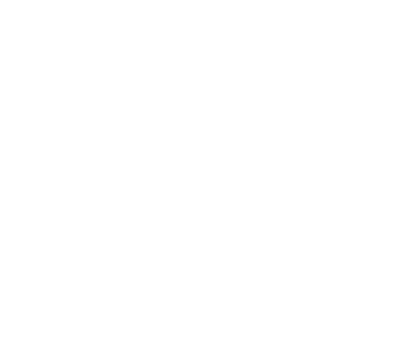 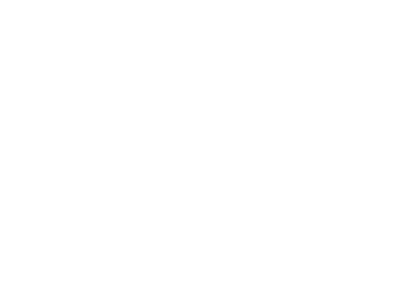 and our technical partners

H2 Motronics is a subsidiary of TEXYS Group.

TEXYS was founded 20 years ago by Etienne Deméocq (former Head of Electronics of the Ligier Formula 1™ team, later Prost Grand Prix), and has been developed across the globe over the years with his business partner Philippe Leuwers. TEXYS is now one of the leading manufacturers of electronic sensing devices.

The chassis and other parts will be designed, developed and manufactured in partnership with TECMAS.

TECMAS is a reknown racing team located in Bourges, in the center of France, created in April 1990 under the impetus of two former riders, Michel Augizeau and Joël Blain.

The main activity of  TECMAS is competition. A pillar of French motorcycling sport, TECMAS is one of the 5 largest structures in the country, with a racing background of more than 20 seasons from 125cc to 1000cc series. Well-known and recognised in the motorcycle world, TECMAS has a huge experience in national, European and world championships, including 6 seasons in the 250cc and 500cc, and 3 seasons in the World Superbike Championship. The TECMAS winning pedigree includes 1 European 250cc title, 10 French 125cc and 250cc titles, 1 French Super Sport title and more recently, in 2017 and 2021, a French Superbike title.

Isatis Capital is an independent management company created in 2013 by the direct fund management investor team of BNP Paribas Private Equity and approved by the Autorité des Marchés Financiers under number GP 13000026.
Specialized in the financing of French SMEs, profitable, innovative, exporting and growing, achieving between 5 and 100 million euros in turnover, we now manage more than 430 million euros and support around thirty of unlisted SMEs to transform them into mid-sized companies.
Active and long-term investors in the real economy, we contribute to the creation of sustainable value. We engage with companies that consider environmental, social and governance issues to be an integral part of their value and performance.

Bpifrance finances and supports companies - at each stage of their development - with loans, guarantees, innovation support and equity. In doing so, Bpifrance acts in support of public policies conducted by the State and the Regions.
Bpifrance supports them in their development, ecological and energy transition, innovation and international projects.
Bpifrance also provides export financing in the name and on behalf of the State. Bpifrance offers, in conjunction with recognized consulting firms and training organizations, support solutions adapted to start-ups, micro-businesses, SMEs and mid-cap companies. Thanks to Bpifrance and its 50 regional offices, entrepreneurs benefit from a close and efficient contact to support them in the sustainable growth of their activity.

The Bourgogne-Franche-Comté region actively contributes to meeting the challenge of ecological and energy transition. It is committed with dedicated funding of up to 90 million euros and a roadmap built and shared with all players in the Hydrogen ecosystem (companies, laboratories, clusters, etc.).
The presence in the territory of an industrial network specializing in the transformation of metals and materials, and expertise in surface treatment are valuable assets to ensure the complete manufacture of the hydrogen systems of tomorrow.

The manufacture of metal pipes, polymer membranes, valves, sensors, surface treatment, microtechnology, are all skills available to the region and which make it a territory of the future for Hydrogen and the environment of Fuel cells that will be manufactured tomorrow.

The newly founded joint venture EKPO Fuel Cell Technologies is a full-service supplier of fuel cell stacks and components. Their technology, applications, and products for fuel cells are based on expertise of more than two decades. ElringKlinger and Plastic Omnium combined have been in business for more than 200 years. EKPO will supply the state-of-the art H2K Fuel Cell stack of H2K.

This technical and scientific resource center is dedicated to Hydrogen Energy systems and in particular to fuel cell systems. FCLab brings together the research activities of Franche-Comté in this field and of five laboratories in neighboring regions.

Among all its objectives, the FCLab provides within a single structure all the skills required for the development of fuel cell systems, from their development to their coupling / integration into real devices. It also supports current developments towards the use of experimental platforms for testing, in particular the durability of energy sources intended for electric and hybrid vehicles.

Ad-Venta designs and produces high quality products, and is always looking for innovative solutions at the crossroads between simplicity, engineering and up-to-date technology.

Today, Ad-Venta has focused its development plan on systems and components for hydrogen applications.

Delegate of the Ministry in charge of Sports since 1945, memeber of FIM and FIM Europe, the FFM (Fédération Française de Motocyclisme plays a leading role in the organization and development of motorcycle sport in France.

Made up of thousands of passionate volunteers in the field, th FFM can count on a unique network of associations to pursue the objectives and the common project of promoting the motorcycle universe in all its forms in France.